The Mac, before and after 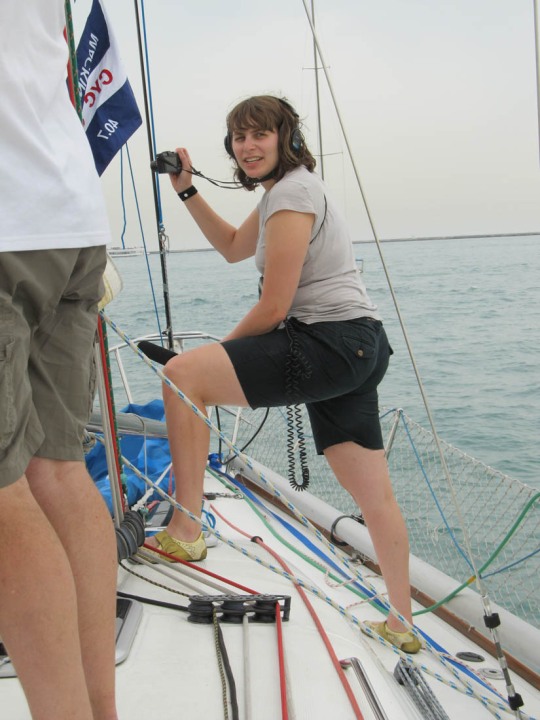 Recording on the deck of Excalibur. Photo by Karen Hoffman.

At the start of the Race to Mackinac I was several miles out from the shoreline, photographing competitors from the press boat. Occasionally a missive would come across the radio from the race committee.

Once all the starters from that category had been accounted for, the race committee would sound the starting cannon and they would be off, colorful spinnakers raised to the wind. The next line of boats would advance from the starting area.

But occasionally a boat would not be accounted for, and the race committee would radio back and forth trying to find them. In the middle of the afternoon we heard this on the radio:

If you’ve been following the news or heard my recent story on the subject, you probably know that WingNuts is a 35 ft. sailboat out of Saginaw, Mich., that would tragically and shockingly lose its skipper another crewmember before the weekend was out.

The Chicago Yacht Club’s Dockmaster, Ryan McPheeters, who was driving the press boat, smiled and shook his head when he heard the race committee was looking for WingNuts. “That boat is wacky,” he told me.

He reiterated. “That boat is wacky and her crew is wacky.”

He pointed out the sides of the hull that swooped out at the deck to make what looked like wings. This was apparently somewhat unusual. I got the impression from the rest of the conversation that when he called the crew wacky he meant they were fun loving and well-liked.

When I came into work Monday morning, preparing to finish what was supposed to be a light-hearted multimedia story about the race, and heard that two competitors had died, I was really stunned.

I remember walking over to my co-worker’s desk in a daze.

“They were from Wingnuts…?”

Going through my tape was like listening for ghosts. I found moments I had forgotten about: the crew of Excalibur reading their Sail Flow charts and pointing out a storm that was likely to hit at 1 a.m. Sunday night; running into Sociable on our way to the start and hearing their crew joke around with Excalibur’s about how they were heading the wrong way, as they went to drop me off at Monroe Harbor.

It was very eerie.

Since I’ve finished the story I’ve gotten some interesting feedback from people in the sailing community. In my reporting, I heard people raise questions about the role of the Coast Guard in the search and rescue operation. Later I heard from a sailor who is also part of the Beneteau fleet that counts both Sociable and Excalibur in its ranks. “Spending the night monitoring the VHF transmissions from Sociable was one of the worst experiences of my life,” he told me. He also said this:

“I don’t know if the expectation of rescue is something more concentrated on the [Great] Lakes or if it comes from inexperience, but I started hearing that around from some sailors who were newer to the sport and none had left the [Great] Lakes. On the Pacific, on shorter races than the Mac, we are regularly out of rescue range for days on end…

Anyhow, the lack of divers certainly didn’t make any difference in the outcome. No chopper could have launched in that storm and it would still take 45 min. to an hour to reach them. After that long unconscious and under water, a diver can’t help anyway. It’s still terrible, but there is no reason to blame lack of rescue. Only to praise the efforts of Sociable and the others who responded.”

This came from a WBEZ listener who heard the story when it aired on 848:

“The USCGC Mackinaw does indeed follow the race, but is there as a courtesy escort. The thought of one boat being expected to ensure the safety of over 300 boats, of different speeds, scattered throughout the lake, is ridiculous, and it’s disturbing to hear that a sailor expected this. Sailing is a challenging sport, and most boaters realize that the responsibility for the their safety ultimately lies in their own hands.

Counting on the Coast Guard to behave like a safety net is a dangerous attitude to bring on the water. Sailing on our Great Lakes is an incredibly rewarding pastime, but the challenges that make it so come with risks that we sailors must accept and take responsibility for.”

I plan to stay on this story, although I don’t relish the next step: talking to the Charlevoix County Sheriff’s office when they get back the coroner’s report some time in the next few weeks.

Next stop, the toxic doughnut

I’m a finalist in the WNYC Podcast Accelerator

The future of petcoke